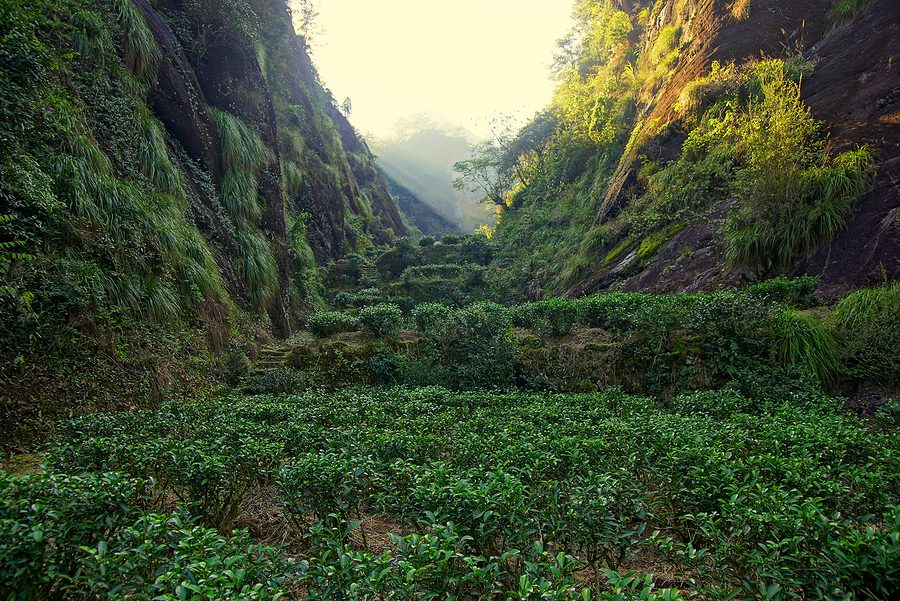 Originates from China, starting out in the Fujian Province in the Tang Dynasty 618 – 907 era.

There seems to be three theories, although they all could have played a part in the evolution of Oolong.

Oolong started to grow in Taiwan from 1796 where the Tea seeds were brought over from the Fujian province in China to be grown on farms in Taiwan, once harvested the tea was sent back to China for processing.

In 1868, John Dodd a British man hired Fujian Tea masters to process Tea in Taipei, they shipped 127 tonne of this tea to the United States where it was well received.

Oolong is grown in 4 main areas

on smaller farms it also can be found in

and even here in Australia

The original plants are protected today and are not harvested, but the tea is grown from cuttings from the original trees. These teas are know for there mineral-rich taste which is from the rocky soil, the teas are twisted into long, wiry strands and heavily roasted.

Anxi County – Fujian – This area is slightly lower elevation and closer to the coast with richer soil and higher humidity than Wuyi Shan Teas, Anxi is known for the Tie Guan Yin or Iron Goddess of Mercy tea which is well known.

Anxi Teas are rolled and roasted.

Phoenix Mountain, Guangdong – grown in a remote part of Guangdong, they are known for Dancong or Single Grove Tea, but mostly they are unknown except for the Tea enthusiasts.

The trees in this area are not plucked until the tree is at least 60 years old, giving a more intense flavour and unique from other Oolongs, with a fruit and floral fragrances to the tea.

Taiwan – the youngest of all the Oolongs growing regions, known for its High Mountain or Gaoshan Tea that is lightly oxidized and unroasted and Dong Ding or Frozen Summit or Ice Peak Tea is the most traditionally made tea mediumly oxidized and roasted.

The tea is roasted at a lower temperature in Taiwan which preserves a more green colour giving it a vibrant green colour liquor with a floral fragrance. Today Taiwan Oolong Teas are highly respected in the Tea industry

Oolong Tea can vary widely in look, taste and aroma depending on the location and production techniques, these flavours varying from sweet, fruity to honey, woody and roasted nuts.

Oolong sits somewhere between Black and Green tea and can have characteristics of either but are more fruity, floral and aromatic.

Oolong is slightly oxidised from 20 to 80% this is determined by the tea master and their process.

The lighter oxidised leaves will get more of its characteristics from Green Tea but smoother with less vegetal flavour and more of a floral and fruity aroma and taste, a bright green or yellow coloured liquor with a sweet after taste.

The higher Oxidized teas are more characteristic of Black teas and are more full bodied with a fruity, honey aroma and caramel, cinnamon, roasted nuts and dried fruits taste with a dark Amber to red coloured liquor.

Another difference between all three teas, Black, Green and Oolong is the shape of the finished leaf, Oolong are long curly strands, or wrapped curled into small rounded balls

The steps in processing Oolong Tea

I hope you enjoyed this little bit of information about Oolong

You can find our beautiful Oolong tea here

All information from Brookfield House should not be mistaken as medical advice. Although there are benefits to consuming tea, we do not guarantee any specific result. Tea is a natural food, not a medicine, and individual experiences and results from drinking it will vary.

Please conduct your own research and take your circumstances into account prior to consumption; including, but not limited to allergies, sensitivities, and health conditions. Please consult a qualified medical practitioner (Doctor) if you are pregnant, breastfeeding or have an existing health concern/s before drinking our teas.